THE BOOK - Jennifer Steil 'The Woman Who Fell from the Sky' 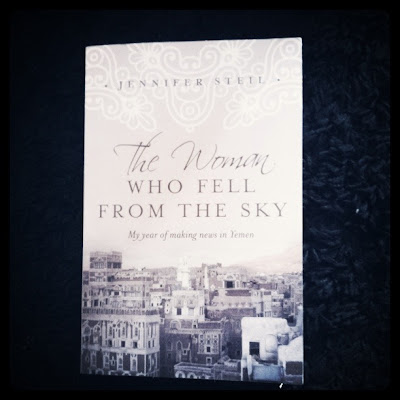 The memoir of a Western woman (Jennifer Steil) working in Yemen. Jennifer answered a calling to train young journalists for three weeks at The Yemen Observer but found herself staying longer and becoming the editor-in-chief of the newspaper.


As expected, many challengers are faced as a Westerner and a woman living in a Muslim, male orientated country, but she makes friends for life and the blurb on the back of the book hints at love being found.


WHY I BOUGHT IT


I bought this just days after the demonstrations began this year in Yemen.


I have always found the Middle Eastern culture interesting. So much so that as a teenager I wanted to convert to Islam as I thought the message of the Qur'an was beautiful but I didn't see it working with my atheist family and I like pork.


Despite my adoration for the Middle East, the first I heard about Yemen was this year and it wasn't positive. This was not good, so when I picked up this book I saw it as a sign. I saw it as an interesting way to learn about an ancient country and culture. Hopefully next time I hear about Yemen it will be more positive news.


I'm almost half way through and have trouble putting it down. It's interesting and I've learned so much already from it. I'll post my thoughts on the book when I've finished reading it.
What are you currently reading?
Disclaimer: This is entirely my own opinion. I have not been paid by anyone for this review and have done it because I like the book. I also do not claim to be a writer, reviewer or anything other than a book lover.
Posted by Ames at 6:00 AM

Email ThisBlogThis!Share to TwitterShare to FacebookShare to Pinterest
Labels: Book of the Week