Guest Post: That Space In Between: All A Mum Needs

Sesame is here! A lovely bunch of bloggers have jumped in to help me out at this time so I don't have to worry about a newborn, a toddler AND blogging. Today, Sarah from That Space In Between is here to talk about her daughter's birth and what really mattered.

A few weeks ago a post I did last year ended up on an online site and I was pretty shocked with how many people commented on the topic. One of the things you notice when you start writing is that you see with great clarity the things that people are interested in talking about…some things bomb and others generate lots of chitterchat. True.

Birth stories and relationships are two of those hot topics…and like most personal experiences I don’t think we are really interested in what the other person has to say, what we are waiting for is the chance to share our little piece of our universe. Having a baby (whether you squeeze it out, get some help or are miraculously given one to care for) is an exceptionally amazing experience. I was going to write about my birth story but my birth story was taken over by my marriage story and sadly sometimes that sticks out more than the popping outness on some days.

I decided when I was pregnant with my daughter 6 years ago that I would have no preconceived ideas about what Id like to do in the birth (other than have a baby, that was a given). I didn’t sit in any one camp in terms of how I’d have her, what Id be doing, thinking, listening to, I’d just focus on having her and giving her a big squeeze when she arrived. I think in some ways the universe was very kind to me because I had a hard time with my (first) husband during the pregnancy and looking back I think that shutting down and just focusing on her being here was the one thing that got me through the lonely nights (some days I cant think of anything more lonely that crying quietly with your partner snoring next to you). I digress.

I was 9 days overdue when I finally went into labor with a little bit of a nudge (Ill just say stretch and sweep and leave it at that – I still haven’t recovered). It was 3 in the morning when I woke with the sort of pain that defies words…I managed at home as best I could until 6am and then lied to the midwife on the phone by telling my husband to say that I couldn’t speak (apparently this was the sign of ‘real’ labour). We made it into the hospital and then met with an annoying midwife who dared me to guess how many centimetres dilated I was. I do admit that thoughts of extreme personal violence flashed across my mind but I managed to mumble ‘don’t know’ to be told 9cm by a clapping buffoon who clearly had been on night shift for too many consecutive nights.

It only took a couple more hours before my daughter entered the world…I had her in the water only because I didn’t have the energy to get out of the bath. Then this is what I remember - the part that makes me stop, where the whole world seems to freeze, goes silent and its like you’re in a movie. Like nothing else exists except for what’s happening for you right then. What made me stop wasn’t the sight of my baby girl being born (um I had my eyes shut) but my beautiful sister to the right of me squeezing my hand whispering “I see her buddy, she’s here, she’s finally here’. And then in a flash of a moment there she was in all her quiet beauty, lying on my chest, staring at me as she still does now with that look of both awe and perplexing curiosity when she doesn’t understand something.
My husband only stuck around for the next few weeks and then was gone but all I needed was my girl and that voice whispered into my ear telling me she was here.

I don’t weigh into the debate of whether or not kids enhance a relationship, it didn’t first time around for me but the minute I became a mum it didn’t matter so much because I knew I was destined for much bigger things. I hope people realise this when times are tough…you can do it alone. Because in reality, you’re not.

Sarah Wayland has been working as a Social Worker in the missing persons field since 2003 and after years  of sharing stories with the media she now writes about life and loss and the spaces in between. Sarah is currently a part-time stay-at-home mum, part-time public servant and part-time postgraduate student in the field of hope and loss at the University of New England. She blogs at That Space In Between and can be found on Facebook and twitter. 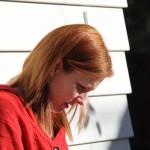