The mister has no interest AT ALL in mental health or psychology. It's not that he isn't supportive in my quest to study, advocate, pursue a career or speak out about my personal mental health problems. He's just not interested. He listens to my enthusiastic ravings but I can see his eyes glaze over. He tries, he really does. He'd much rather know how everything works, like a machine. He's into the mechanics of things, including the human body and brain, whereas that goes in one of my ears and out the other. We'd be awesome in exams, he'd do the physiological and I'd do the psychological.

The mister also has trouble believing that many mental illnesses exist. That's not to say he doesn't support me with mine but he doesn't understand it because he's just not interested. He doesn't stop me from speaking out, he reads what I write about mental health and is supportive in every way though.

I believe him being uninterested doesn't affect my mental health though nor his. We are open communicators and discuss our emotions, observations and perceptions about everything. We are comfortable in knowing that disagreeing with the other person doesn't make them or you stupid and doesn't mean you love each other any less. We value that we are different people and support each other no matter what. That means we can disagree in public but we debate rather than criticise, we discuss rather than argue and we don't put each other down. 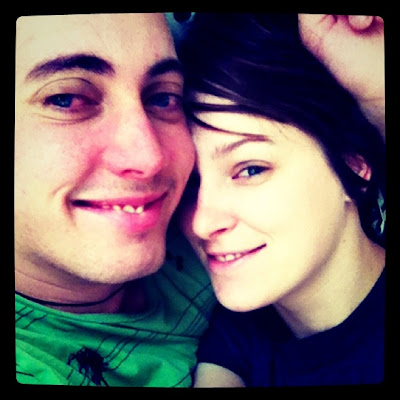 I'm highly opinionated, always have been and always will. I've made and lost friends due to it. I've argued, bickered and stewed over topics with my family, friends, teachers and exes but never have I encountered the mature level of communication the mister and I share. I find it hard to say I'm wrong (I rarely am so I'm not used to it) but the mister has taught me that it's ok to admit you are wrong. It doesn't mean you are less of a person, in fact the opposite.

It's because of our communication and his support I am finding my voice again. I'm finding that I'm determined to help people and that I, one person without sufficient credentials, can help make a difference.

So, I thank the mental illness skeptic in my life for supporting me in talking about my mental health and helping others talk about theirs. I know that if I didn't have his support though I could find support through expected mental health supporters like Lifeline, SANE, my online community - twitter, facebook, Digital Parents, blogs, friends or family. Support can also be found through doctors, teachers, co-workers, and mental health professionals such as mental health nurses, psychologists and psychiatrists.

Do you have an unexpected supporter in your life?
Posted by Ames at 8:51 AM

Email ThisBlogThis!Share to TwitterShare to FacebookShare to Pinterest
Labels: 31 Days of Mental Health, Anxiety, Me, Mental Health, The Mister, Trichotillomania