Yesterday we celebrated a life and mourned that that life was no longer being lived.
I'm a crier. I cry at Huggies ads on TV. I cry at weddings. Funerals are the worse though. I'm one of those people that would walk into a stranger's funeral and cry so much the family would end up comforting me. I can't help it. It's the pain felt by others.
I attended a funeral of the partner of a close friend from high school just before Christmas. I felt so much sadness for her loss and his. He wouldn't be there for his son's first Christmas or birthday, she wouldn't have him by her side anymore. They would never get married. He wouldn't see his son grow up. He wouldn't be able to teach his son to drive or ride bikes, two things he loved doing. My friend was so composed throughout the funeral, how I don't know. She said she was all cried out. I was too by the end of the day. My heart still pains for her and her son. It always will.
My Opa's funeral was at the same place. Two funerals in six months. I've only been to six funerals and don't remember two as I was too young.
Opa's funeral was lovely. I've never been to one that wasn't, celebrants, priests and whoever else conduct funerals do such a good job.
My uncle did the eulogy and he did an amazing job. I think it helped him get through the day. I'm glad he said it. Opa would have been extremely proud.
My cousins wrote a tribute to Opa too. I did but didn't send it through. I didn't need to as Cerrissa said everything I would have. His wink, cheeky smile, chases around the house tickling, big sloppy kiss hello and goodbye and his wonderful bear hugs. That was my Opa. My cousins and I nodded our heads laughing throughout the tribute.
The photos. So many photos. Photos from Germany. Photos of his family. His mum. His dad. There was even a photo of his dad's funeral. So many photos we hadn't seen before. Photos of his kids young and old. Photos of the grandkids through the years. Photos of his great grandchild young because he'll never see him grow.
The coffin. I saw it without anything on it. I touched it twice. I cried heavily twice. The mister said the closer I got to the coffin the more I cried. It's true. He was there. He was right there yet I couldn't see him, couldn't touch him. He was there but he wasn't.
The closing of the curtains. The final goodbye. I had to hold myself back from running forward and stopping them from closing. I had to hold myself to the seat so I didn't yell 'Not yet it's not time. We are not ready'. The last time we would see him but not. The last time his body would be whole even though his mind wasn't for so long.
A service to celebrate a life, mourn a death and crave a change in this course called living.
A wonderful life he had and so many lives he touched. 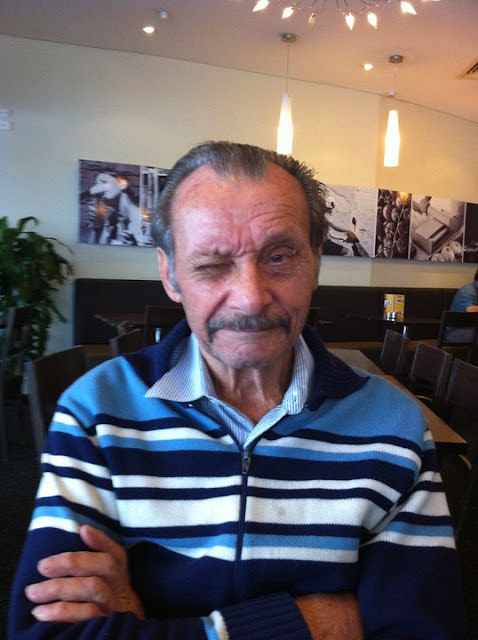