We are not current DVD player owners.
Our first DVD player died after munchkin decided to put not one but two DVDs in the machine at the same time. Our second one is now owned by my dad as his died and he needs it to watch awesome movies.
We do have a sweet set up though which enables us to still watch DVDs on our TV or computer. Thank you Mac. Munchkin loves sitting at the desk watching his movies through the computer.
Munchkin is definitely a boy when it comes to movies with his favourites being Cars, Toy Story, Monsters Inc, and A Bugs Life. He does branch out though loving Tangled and Dora. He can't wait till he sees Cars 2 and every time an ad for it comes on there are tears. He doesn't understand why he can't watch it now. It's like teasing the poor boy.
I'm sick of Mater's Tall Tales at the moment as it has to be on the computer all day, even if he is playing in his room. The only break I'm really getting is when he is sleeping. It's funny and I still laugh but I'm over it.
As munchkin is such a boy loving anything to do with cars or tools I jumped at the chance to review the Handy Manny; Manny's Big Race DVD which is available in stores from 6th July 2011. It has cars. It has tools. Perfect! 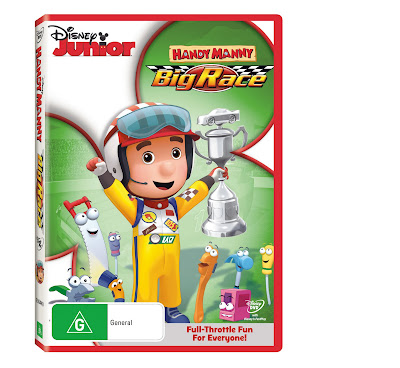 What I didn't realise was all the surprises this DVD has. I thought it only had, and was happy with, the one episode, 'Big Race'. Imagine my delight when two more Handy Manny episodes; 'Bunny in the Basement' and 'Fast Eddie's Scooter' followed 'Big Race'. Not to mention my surprise when I saw the bonus features; My Friends Tigger & Pooh: 'Tigger A Yo-Yo' and 'Pooh Loses His Shirt'. I nearly wet myself.
Munchkin came home from daycare, said hi, took his shoes off, had something to eat and sat down ready for a new movie! I admit I was a bit apprehensive as he is very sure about what he likes and what he doesn't. I was worried he wouldn't watch it and I'd be writing a fake review. Thank goodness he watched it, not once but twice.
The mister, munchkin and I all sat down to watch Handy Manny's Big Race. The mister's first comment was along the lines of 'Handy Manny is lazy, he doesn't do anything, the tools do all the work!'. I then reminded him that Handy Manny is awesome because he is voiced by Wilmar Valderrama who plays Fez on That 70's Show.
Munchkin did not take his eyes off the screen the whole time. Well no I lie. He took his eyes off the screen to say wow and clap. He loved it. The colours, sounds, music, characters, and fun voices all kept him entertained.
I love how in all the Handy Manny episodes team work, encouragement, friendship, counting, and different languages are all included. A bonus, there is no violence in any of them. How good is that! It's educational and fun. Plus it's not annoying which is handy (haha) for us parents who have to listen to movies over and over again.
My favourite tool was the blue screwdriver, his personality shines in 'Bunny in the Basement'. His name is Turner too, which is the name of my favourite teddy bear.
I'd highly recommend this DVD to mother's of young kids, girl or boy which is a good thing as I have one to give away to a reader!
All you need to do is leave a comment telling me what is your or your munchkin's favourite kid's movie. Easy as!
Winner will be drawn by random.org on Friday 1st July 2011.
Sorry this competition is open for Australian addresses only.
You don't have to be a follower or a blogger to enter!!
Disclosure: I received a complimentary DVD review copy courtesy of Walt Disney Studios Home Entertainment and Porter Novelli via Digital Parents. No financial payment was offered nor accepted for this post. All opinions expressed are purely my own.
Posted by Ames at 10:08 PM